This is a list of all featured articles showcased on the USS Pacifica's Online Database Main Page. 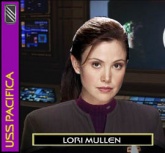 Lori was raised from her birth by her mother and she grew up not knowing her father who had died in a tragic accident two months before she was born. Lori was a naturally gifted child who throughout her childhood had her eyes set on joining Starfleet, her grades in school reflected this dream as she was one of the brightest students throughout her schooling years. She lost her focus during her final years as a teenager as she went through a rebellious phase that caused friction in her relationship with her mother and caused her grades to drop drastically. She still had her eyes set on joining on Starfleet and she applied to join the Academy just after her twentieth birthday.

The USS Pacifica while on patrol received a distress call from a Federation Convoy and it’s escort the USS Roswell. The Pacifica responded to the distress call and arrived on the scene to find the Roswell and the convoy under attack by three small pirate vessels. The Pacifica managed to drive off the attacking ships and gave chase to them once the USS Isis had arrived to render assistance to the convoy. The pirates were tracked to an M-Class Planet in the Pearen System which was inhabitated by creatures similar to dinosaurs from Earth’s past. 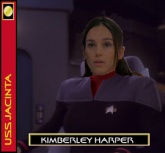 Kimberley grew up on a very small working farm in Kentucky North America. She spent a lot of childhood helping her father and elder brothers out on the farm where she became a skilled farm hand. She also developed a keen love for horses and became a gifted horse rider in her youth, she often participated in a number of show jumping events much to her delight of her family. Even though she grew up on a farm Kimberley was dedicated to her schooling, always managing to finish in the top few of her class. It was during her last few years at school that she began to set her sights on joining Star Fleet, as she wanted a change from everyday farm work even though she enjoyed it. Her parents were not happy with her decision to join Star Fleet as they had hoped that she would one day take over the farm since her brothers had already moved on but despite her parents wishes she applied to join Star Fleet Academy and passed the entrance exams without much trouble. This effectively put her relationship with her parents on the rocks, as they continued to refuse to accept her decision. 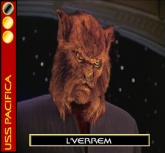 L'Verrem was born on his native Cait in 2344. His childhood was typical of other Caitians. His father is part of the planetary defense forces. As a warrior, he felt it was his duty to teach his children the ways of combat-for-protection. He learned the ceremonial fighting discipline of Rakun from early childhood and did well. He also gathered a special appreciation for written languages. He found certain human, Vulcan, and Bajoran writing techniques as beautiful as Caitian calligraphy. He began his advanced education by attending the University of Cait, where he received a four-year degree in Caitian calligraphy art as well as a minor in political science. He followed his urge to wander about the stars to learn more about these races and their art, as well as fulfilling the Caitian imperative of serving living for honor, by attending the Starfleet Academy in the officer training program.

Starfleet’s newest Starship the Sovereign Class, USS Pacifica is docked at Starbase 33 where it is undergoing it’s final fitting before shakedown. One by one the members of ship’s first crew start to arrive onboard led by it’s commanding officer Captain Daniel Butterworth and First Officer Commander Luke Evans, who arrive beforehand to take a personal look at the new ship. With the crew arrivals proceeding on schedule both Butterworth and Evans took the opportunity to meet with the rest of the Pacifica’s handpicked senior officers, including Chief Operations Officer, Lt. Commander Evan Ottaway and the ship’s Chief Medical Officer, Doctor Connie Morgan. 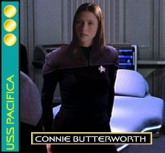 Named after her grandmother Connie Elizabeth Morgan was born on the 5th of October 2352 in the city of Sydney Australia on the planet of Earth to parents Elizabeth and Patrick Morgan. At the time of her birth both of her parents had taken leave from their work with the Starfleet Diplomatic Core where her mother was serving as a Diplomat to focus on their new roles as parents. Elizabeth briefly returned to her with the Diplomatic Core in September 2353, but made the decision to step back from her work in 2354 so she could focus all of her attention on raising her daughter with Patrick. Her decision to step away from work had also been triggered by the news that she was pregnant with her second child. The Morgan’s packed up their lives in Sydney and moved to the much quieter city of Hobart on Australia’s southern island called Tasmania where practically all of Elizabeth’s large extended family lived including her own parents.

The Sovereign Class starship was born out the necessity for more combat oriented starships to help combat the Borg Collective, yet keep host to a wide variety of exploratory and diplomatic missions during peacetime. Originally three starship designs were fielded to combat the Borg: Project Sovereign, Project Defiant and Project Nova. Both the Defiant and Nova projects were considered entirely too small to field what was needed; however they were later rebuilt into separate starship designs. For the mainstay of what the project called for, the Sovereign design was chosen to essentially replace the Galaxy Class as the flagship design of the Federation.