Basic Overview in Character and Out of Character

Francine Hart has been with the Pacifica since July 2002 playing the character of Lieutenant Francine Hart. She was named as the Michelle Cox Memorial Ship Role Player of the Year for the Pacifica in 2004.

Francine is a fit athletic person who keeps a slender figure. She has long pretty red hair that she often keeps neatly up in a ponytail or in a bun when she is on duty. She also brown eyes and a youthful bright glow about her and she likes to keep herself looking neat and clean.

Francine is young and inexperienced at her job as a Operations Officer, but she always tries her best. She can some times over do it which makes her feel uncomfortable and stresses her. She can also panic a little bit during such things like combat. But this has changed over the last year or so as she has grown in confidence in her position and is now a valued member of the [[USS Pacifica}Pacifica's]] senior crew. She is still prone to overdoing things and she still does get stressed out but this comes from her drive to achieve what she set's out to do.

Off duty Francine is one of a number of smiling faces that makes up the crew, she is a nice person by nature who has a kind heart. She is very approachable and enjoys meeting new people, she is generally understanding but she isn't afraid to voice her own opinions especially when she notices something is wrong. Francine also has a strong sense of loyalty to her friends and she is always there to lend them an ear if they want to get something off of their chests.

Strengths: Francines overall commitment to her friends and to Starfleet.

Weaknesses: Can sometimes suffer from a lack of confidence, that comes from her lack of experience.

Off duty Francine likes to pass the time in a number of different ways including spending time in the holodeck as well as playing games such as chess as to keep her brain ticking over. She can often been found in the upper level of Jadda's playing chess with her workmates. She also likes to spend some of her free time in the ship's gym as she likes to keep herself in good health.

Francine grew up with having both parents working in Starfleet which helped Francine fall in love with her own ideas of flying around in space in big space ships. After spending her early life in space, Francine returned to Earth to live with her grandparents so she could really be able to concentrate on her schooling, when she reached the age of 16 she applied for entry to Star Fleet Academy.

Due to her own commitment Francine done well as the academy. She attended many classes, doing minor courses in science and flight control as well as two of the major Engineering and Operations courses. She graduated with marks around the 65% mark, her mark was mainly lacking because of a lack of practical use. But as she has completed a variety of different courses she is a more then capable officer. 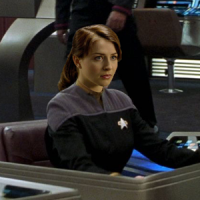 She was further promoted to the rank of full Lieutenant later on in the year. Francine played an important role in the Pacifica's mission in the Archerian System. She was one of the members of the second away team who were caught by the Archerians, upon returning to the Pacifica she played an important role in assisting with the investigation that solved the mystery that the ship was facing. Since then she has continued to serve on the Pacifica without any other incident, and has also formed a number of strong friendships with different members of the crew.

In 2382 during an away team mission on Pearen IV where they were searching for a pirate base. Francine and members of two away teams became stranded on the planet after their Runabouts crashed and they lost contact with the Pacifica. During this mission Francine was badly injured when she saved the life of a fellow crewmember. After taking a nasty fall that had separated her from the rest of the away team she was found unconscious by a powerful sentient life form. This life form managed to communicate with her telepathically with her while she was unconscious. It was through this communication between the two of them that Francine was able to learn the reasons why they had crashed on the planet in this first place. The sentient life form that had found her had been responsible for the entire thing as it had believed the Pacifica and it's crew were trying to move in on it's home and it was trying to protect itself. Realising from that the Pacifica was also in danger Francine was able to convince the alien that the Pacifica and it's crew meant the creature no harm as they had no interest in settling on the planet. 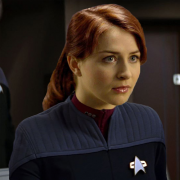 Lieutenant Commander Francine Hart (2385)
After being found by Commander Polaris and Ensign Sinclair the alien life form assisted them in getting Francine back to the Pacifica for emergency medical treatment as she was near death. After a long touch and go surgery conducted by Doctor Morgan, Francine began a long recovery process that kept her in Sickbay for just over two weeks and off duty for over a month. For her actions on the planet Francine was awarded the Christopher Pike Medal of Valor for her actions and the Purple Heart for the injuries that she had received.

The Christopher Pike Medal of Valour | 2006

The USS Pacifica Role Player of the Year Award | 2004

Most Popular Character of the Year Award | 2005