"I’ve left this ship once before, I don’t feel right doing it again. My time of DS9 was well worth it… but I’m not a planet-bound kinda guy. I need room to move – a ship to work on.."

Average height good build if not a little slouched at times, well postured most times and no major characteristics that pick him out of a crowd.

Kind hearted and a gentlemen, James has always tried to behave as he was meant to although sometimes a little short tempered. He is a good listener, although he can be a little too talkative at times too quick-thinking gives him a sharp edge but he can sometimes ignore better solutions if he sees his one as being the best idea.

Grew up working on weather monitoring devices and seismic movement detection systems. A little experience in piloting shuttles, as his father was a pilot aboard a starship. A little medicinal knowledge from his mother which got him interested in science at an early age.

A quiet academy life Harris came out near the top of his class, however some of his practical work was noted to be a little radical but efficient none the less.

Once Harris had graduated from Starfleet Academy, he carried out some work for Starfleet as part of a team that tested colonised planets of seismic disturbances and any other threats to the population. Although Harris learnt a lot he was tired of planet-hopping and wanted to be posted aboard a starship, after several year of this meanial work his wish was granted. Harris was posted aboard the USS Venerable as Chief Science Officer and promoted to Lieutenant Junior Grade. After many months of service a mission arose where the command crew was captured by Romulans under orders from his CO Harris with the field rank of Lieutenant returned the ship and it's crew to the nearest Starbase where each crew member was reallocated to various ships. Harris waited at the starbase with the ship knowing he would be called upon, eventually word came from his CO and he reformed most of the crew to re-enter Romulan space to rescue the others. However as Harris became his temporary XO he was put in control of the ship whilst the CO was elsewhere finding a new crew, circumstances caused Harris to make some less than ethical decisions causing the CO to get very angry. Although he was not ordered to leave the ship Harris returned to the Starbase realizing that his time away from the crew had changed him as a person.

Certain experiences has made an impact whilst he was aboard the Starbase which will always affect his future although he has had no contact with the Venerable's crew he does not hold any grudges against them - however his memories are painfully sour. Harris eventually transferred to the Pacifica and took up the position of Chief Science Officer where he served during one of the Pacifica's most challenging missions. During the mission he earned the respect of all of the Pacifica's crew and earned him self the nick name of JG a name which would eventually wear off and one which would be used to tease him from time to time.

When the Pacifica returned to the Alpha Quadrant Harris was offered a position on a team that was stationed on DS9 that was doing a study of the Bajoran wormhole. He took up the position and transferred to ds9 via the USS Enterprise NCC-1701-E. He served with the team on DS9 for a few months before reapplying for the a position on the Pacifica as he missed his comrades on the ship and it's way of life. He returned to the Pacifica and happily took up the position as the ship's Astrometrics Officer. During the Pacifica's mission to rescue the sunken starship USS Noble Harris acquired a lost cat whom has he grown very affectionate towards. The cat now lives with Harris aboard the Pacifica sleeping in the replicator shelf for most of the time, Harris named the cat Shakaar after his deep respect for the Bajoran people and their way of life. Harris later returned to his beloved position of Chief Science Officer which he held for a number of months, Harris eventually left the Pacifica again along with Ensign Owen Banks as both scientists joined the research team heading for the new Typhon Colony to catalogue the ruins found on the surface by the Pacifica 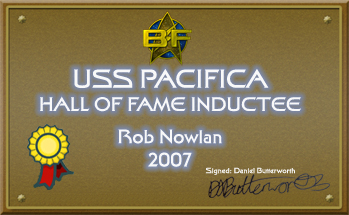 Member of the USS Pacifica's Hall of Fame

Out of Character Information