"Peace be between us."

L'Verrem is a Starfleet Officer and current Commanding Officer of the Federation Starship Destiny. Prior to his assignment on the Destiny L'Verrem served on the USS Pacifica NCC-72545 from 2379 to 2382 as both Executive Officer & Chief Strategic Operations Officer.

His body fur is a light tan and his mane is a cinnamon brown. L'Verrem keeps his mane long in the back, sometimes in a tail clasped with a metal ring with inscribed with a Caitian religious blessing. When permissible, he wears a necklace consisting of a small stone circle with a hole through with an inscription in Caitian calligraphy and a leather string. He has a long tail with the same fur colors.

Caitains have greatly hightened senses of touch, smell, sight, and hearing, compared to humans. The pads on his hands and feet are extremely sensitive and can detect vibrations much smaller in amplitude and longer in frequency than humans. L'Verrem's ears can be moved independantly and will subconciously be constantly scanning around unless he is paying attention to someone or something. His sight allows him to see in much lower light levels than humans, but at the cost of reduced color distinction at standard lighting levels. L' Verrem does not wear shoes in most cases as his foot pads provide adequate protection and allow him to move stealthily. He is able sprint at speeds of up to 25 mph for brief timespans.

Caitians use body language as part of their communication technique. The degree of his tail motion and the setting of his eyes, ears, and whiskers are all important indicators.

L'Verrem is very friendly and intensely loyal to those he calls friends. He develops very close bonds with them and will defend them like they were family. He is a highly social creature, and spends most of his time around others. He treats others with deep respect and honor. He will almost always refer to others with their full rank and name, as is Caitian tradition to show respect. In informal settings, he may not always use rank, but will always use a person's full name. Single names are reserved only for a Caitian's mate or descendant family member. Like most other Caitians, he has a great appreciation for beauty and art (some of the Federation's other races would label Caitians almost hedonistic in their pursuit of them). He carries out his duties with zeal and efficiency to honor his commanding officer and his shipmates. He will attempt to avoid combat, using violence as a last option. When he must use it, he fights to win.

The Caitian native language is more precise in description than Federation Standard and thus does not use figures of speech. This sometimes causes L'Verrem to misunderstand humans, taking a figure of speech literally. As much as he has tried to learn what specific figures of speech mean, new ones are always appearing. He has concluded he may never understand them all, but does find this use of language an interesting artform. Native Cait also doesn't use contractions, so he will speak Federation standard without using them.

L'Verrem's strength is in his loyalty to his friends, his commanding officer, and to the ideals of the Federation. He cannot be bribed or coerced to betray them. He has taken his studies of Caits Great Messenger to heart and lives them the best he can. Like most other Caitians, he will not seek to use force until absolutely necessary (Caitians are generally pacifistic). This may cause him to hesitate to use force when it is called for, causing a vulnerability that an advesary could exploit.

Like most officers in Starfleet, he dreams to command a starship himself, someday. The Caitian wanderlust is strong in him and he finds the life of a starship officer, always travelling from place to place, very appealing.

L'Verrem is a devout follower of the teachings of Cait's Great Messenger, who long ago united Cait's tribes and taught them to live in peace with one another. He is also prideful of his Cait heritage and follows Caitian traditions, and enjoys sharing them with others. He is an avid music lover and plays the Caitian stringed instrument, the Mgrrrrr'than. He regularly meets in Jadda's Lounge with other musicians on the Pacifica for weekly music playing sessions, and will play at certain events to entertain his shipmates. L'Verrem greatly enjoys traditional Caitian calligraphy, as well as Vulcan, Bajoran, and Japanese writing styles. He is adept at Caitian calligraphy, and has mastered Japanese sho-do as well. He is learning Vulcan and Bajoran styles right now. He is also an advanced student of Rakun, a traditional fighting discipline using a rapier-like sword and a dagger (called the rakgr�n and raksir). He also collects little works of art from the places he visits.

L'Verrem was born on his native Cait in 2344. His childhood was typical of other Caitians. His father is part of the planetary defense forces. As a warrior, he felt it was his duty to teach his children the ways of combat-for-protection. He learned the ceremonial fighting discipline of Rakun from early childhood and did well. He also gathered a special appreciation for written languages. He found certain human, Vulcan, and Bajoran writing techniques as beautiful as Caitian calligraphy. He began his advanced education by attending the University of Cait, where he received a four-year degree in Caitian calligraphy art as well as a minor in political science. He followed his urge to wander about the stars to learn more about these races and their art, as well as fulfilling the Caitian imperative of serving living for honor, by attending the Starfleet Academy in the officer training program. He was accepted at age 23 in 2367. He became intrigued with strategy, seeing it more as art than science. He concentrated in strategic operations in the latter part of his Academy training. He graduated in the top 1/3 of his class in 2371. 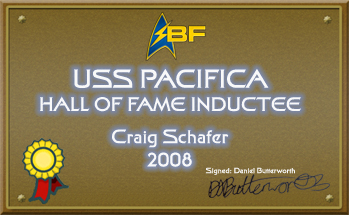 Member of the USS Pacifica's Hall of Fame

The USS Pacifica Most Popular Character of the Year Award | 2006