Magna Romans are in almost all senses human. Marcus has short-cropped black hair. His deep blue eyes can seemingly pierce the bulk heads as he is prone to staring at some unknown point when he is thinking deeply about a subject. He has a rather thin build due to the lack of manual work during his aristocratic upbringing.

As the son of a Roman Senator, Marcus has lived a life of privilege. However, living outside of Roman influence for much of his adult life has taught him a great deal of humility. Marcus often tends to be a loner.

Marcus can be a very logical thinker.

From the moment Marcus entered Starfleet his number one ambition has been to show his family that there is more to life then the politics of the Roman senate and that you don�t have to be flamboyant and obsessive to be successful.

History and Politics, both of Earth and of Magna Roma. Marcus has spent a lot of time studying the similarities of the two worlds. He enjoys building models, and playing out recreations of historical Naval battles. While aboard the USS Iowa he built a model of the 20th Century Earth battleship USS Iowa, BB-61 [1].

Siblings: 5 Brothers, 2 Sisters His oldest brother is Jules Octavian Cesarian. Jules is currently on board the Pacifica working as a Trade Ambassador from Magna Roma. Marcus is the Second oldest son. The youngest sister is Helena.

Children: Marcus has one son, William Corbett-Cesarian. William and Marcus have only recently come to know of each other. William’s mother, Jes Corbett had been a girlfriend of Marcus while he was on Earth. Marcus left Earth before knowing Jes was pregnant and she never told him. When Jes discovered that she was sick, she got in contact with Jules. 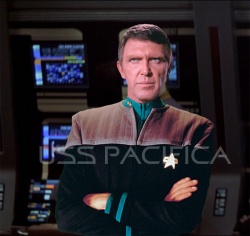 Marcus Cesarian on the bridge of the USS Pacifica

Marcus Was born August 13th 2341 in Nova Britannia, Magna Roma. He was a quiet child who difficulting developing any sort of bond with his father, or any of his younger siblings. At the age of 6, his older brother Jules attempted to teach him how to ride a horse. Jules led the horse around a riding path while Marcus held onto the reigns. A startled deer ran out of the woods and across the path in front of the horse, scaring it. The horse threw Marcus to the ground and nearly trampled him. Jules became very protective of Marcus from that point on.

Marcus attended Hiberius University (Nova Britannia, Magna Roma) from 2357 to 2360. He studied economics and history. Shortly before he graduate, Marcus's father arranged for him to take up an apprenticeship with the Merchant guild Legionarius, but he refused. This caused a major rift in their relationship. When Marcus graduated he left Magna Roma and moved to Chicago, Ill (Earth). There he worked as an administrative assistant for a shipping firm, Jacobson Swift. In his spare time he studied Earth history, specializing in Ancient Rome. It was during this time that Marcus met and fell in love with Jes Corbett.

In 2363 he finally decided to returned to Magna Roma due for what was supposed to be a short visit. Magna Roma was formally becoming a full member of the Federation and his family's Senatorial position required him to be a part of the celebrations. Once home he found it difficult to return to Earth which ended his relationship with Jes. Marcus wasn't aware that Jes was pregnant at the time with William.

Marcus remained on Magna Roma until early 2372, when, at the urging of Jules, Marcus entered Starfleet Academy. His academy career was rather uneventful. While attending Advanced Tactical School, he undertook the Kobayashi Maru test 11 times. It is still a no win scenario. Marcus graduated in 2376.

2376 - Marcus was assigned to McKinley Station while waiting for his first shipboard assignment.

In 2378 Marcus was assigned to the USS Iowa, NCC-76472, as the Chief Operations Officer. At the Beginning of January 2379 Marcus was promoted to Lt. JG and reassigned as Chief Engineer. During the Iowa's last mission in April 2379, The ship was heavily damaged and Starfleet made the decision to take the ship out of service.

The USS Pacifica Smartest Officer of the Year Award | 2006